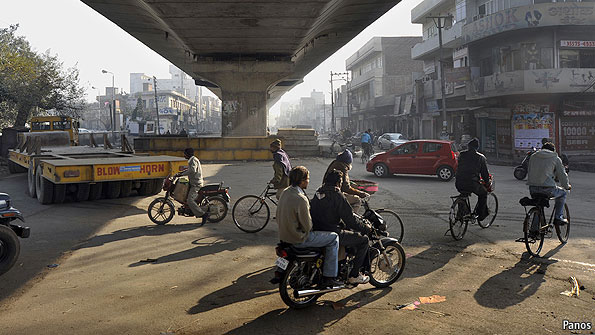 EXPECTATIONS for India’s economic growth rate have been sliding inexorably. In the early spring there was still heady talk about 9-10% being the new natural rate of expansion, a trajectory which if maintained would make the country an economic superpower in a couple of decades. Now things look very different. The latest GDP growth figure slipped to 6.9% and industrial production numbers just released, on December 12th, showed a decline of 5.1% compared with the previous period, a miserable state of affairs. The slump looks broadly based, from mining to capital goods, and in severity compares with that experienced at the height of the financial crisis, in February 2009, when a drop of 7.2% took place. Bombast is turning to panic.
Several riders apply. The industrial production series is notoriously volatile—most economists admit to being baffled by its swings. The comparison with the prior year period was unflattering. And it would be surprising if India were not hurt by the agonies of the rich world—after all from China to Brazil investors are jittery about the outlook, too. Moreover the Reserve Bank of India (RBI) has been raising rates through the year to try to bring inflation, running at some 9%, under control. At Mumbai drinks parties, after a scotch too many, industrialists can be reduced to apoplexy on this subject—the central bank, they argue, has overreacted, killing growth to tame an inflation problem that is largely the result of structural factors such as poor food supply chains.
Yet another factor looms. Years of government drift have meant a loss of momentum on reform, from building infrastructure to controlling graft. That drift was symbolised by the ruling coalition’s decision this month to allow in foreign supermarkets into India, which it was forced to reverse two weeks later after widespread protests and objections from the smaller parties it relies on to stay in power. India’s economy can seem like a bicycle—it needs to keep moving fast to be stable. Once conviction in the destination falters, companies curb investment and hope turns to fear that the country’s problems may be intractable.
An optimistic reading of these latest numbers is that they might force India’s politicians to move beyond the rancour of recent months and agree a program of reforms that would bolster confidence at home and abroad. But given a busy electoral cycle the odds of that seem poor. The concern now is that if growth slows a whole lot of other worries come to the fore, from potential bad debts in the banking system, the government’s poor fiscal position and the challenge of funding a current-account deficit when outside investors have got cold feet. Already the rupee has slid reflecting the last of those worries. India’s finances look solid when it is motoring along at close to double digits and weak when it is expanding at half that rate.
Given all this an uncomfortable burden of expectation now sits on the shoulders of the RBI, one of the few government institutions in India that commands respect, albeit grudgingly from some business folk. It could start cutting rates. But given inflation is still quite persistent, this would involve a theological U-turn. It has other tools available to try to ease the supply of credit, such as lowering the amount of cash banks must hold as reserves, creating room on their balance sheets to lend more. Unless there is a sudden change in government policy—or those statistics are shown to be cranky—action now seems likely. But as in the rich world, India may find that central banks cannot always work short-term economic miracles, nor sustain long-term ones all on their own.
市場行銷觀察 金融 Marketing