In One Slum, Misery, Work, Politics and Hope 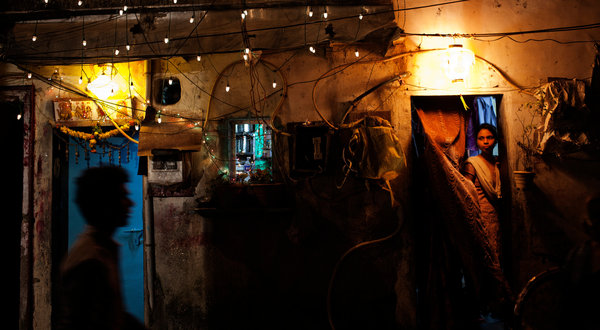 Adam Ferguson for The New York Times
As many as a million people live and work in Dharavi, a sprawling slum in Mumbai, India. More Photos »

Articles in this series are examining the messy and maddening road to progress in India.

Getting Ahead in Dharavi

GRAPHIC: An Industrial Slum at the Heart of Mumbai

Follow@nytimesworld for international breaking news and headlines.
Enlarge This Image

An extended family of 15 people lives in a Dharavi house with 180 square feet of space. More Photos »
Yet inside, carpenters are assembling furniture on the ground floor. One floor up, men are busily cutting and stitching blue jeans. Upstairs from them, workers are crouched over sewing machines, making blouses. And at the top, still more workers are fashioning men’s suits and wedding apparel. One crumbling shanty. Four businesses.
In the labyrinthine slum known as Dharavi are 60,000 structures, many of them shanties, and as many as one million people living and working on a triangle of land barely two-thirds the size of Central Park in Manhattan. Dharavi is one of the world’s most infamous slums, a cliché of Indian misery. It is also a churning hive of workshops with an annual economic output estimated to be $600 million to more than $1 billion.
“This is a parallel economy,” said Mr. Mobin, whose family is involved in several businesses in Dharavi. “In most developed countries, there is only one economy. But in India, there are two.”
India is a rising economic power, even as huge portions of its economy operate in the shadows. Its “formal” economy consists of businesses that pay taxes, adhere to labor regulations and burnish the country’s global image. India’s “informal” economy is everything else: the hundreds of millions of shopkeepers, farmers, construction workers, taxi drivers, street vendors, rag pickers, tailors, repairmen, middlemen, black marketeers and more.
This divide exists in other developing countries, but it is a chasm in India: experts estimate that the informal sector is responsible for the overwhelming majority of India’s annual economic growth and as much as 90 percent of all employment. The informal economy exists largely outside government oversight and, in the case of slums like Dharavi, without government help or encouragement.
For years, India’s government has tried with mixed success to increase industrial output by developing special economic zones to lure major manufacturers. Dharavi, by contrast, could be called a self-created special economic zone for the poor. It is a visual eyesore, a symbol of raw inequality that epitomizes the failure of policy makers to accommodate the millions of rural migrants searching for opportunity in Indian cities. It also underscores the determination of those migrants to come anyway.
“Economic opportunity in India still lies, to a large extent, in urban areas,” said Eswar Prasad, a leading economist. “The problem is that government hasn’t provided easy channels to be employed in the formal sector. So the informal sector is where the activity lies.”
Dharavi is Dickens and Horatio Alger and Upton Sinclair. It is ingrained in the Indian imagination, depicted in books or Bollywood movies, as well as in the Oscar-winning hit “Slumdog Millionaire.” Dharavi has been examined in a Harvard Business School case study and dissected by urban planners from Europe to Japan. Yet merely trying to define Dharavi is contested.
“Maybe to anyone who has not seen Dharavi, Dharavi is a slum, a huge slum,” said Gautam Chatterjee, the principal secretary overseeing the Housing Ministry in Maharashtra State. “But I have also looked at Dharavi as a city within a city, an informal city.”
It is an informal city as layered as Mr. Mobin’s sheared building — and as fragile. Plans to raze and redevelop Dharavi into a “normal” neighborhood have stirred a debate about what would be gained but also about what might be lost by trying to control and regulate Dharavi. Every layer of Dharavi, when exposed, reveals something far more complicated, and organic, than the concept of a slum as merely a warehouse for the poor.
One slum. Four layers. Four realities.
On the ground floor is misery.
One floor up is work.
Another floor up is politics.
And at the top is hope.
“Dharavi,” said Hariram Tanwar, 64, a local businessman, “is a mini-India.”
Misery
The streets smell of sewage and sweets. There are not enough toilets. There is not enough water. There is not enough space. Laborers sleep in sheds known as pongal houses, six men, maybe eight, packed into a single, tiny room — multiplied by many tiny rooms. Hygiene is terrible. Diarrhea and malaria are common. Tuberculosis floats in the air, spread by coughing or spitting. Dharavi, like the epic slums of Karachi, Pakistan, or Rio de Janeiro, is often categorized as a problem still unsolved, an emblem of inequity pressing against Mumbai, India’s richest and most glamorous city. A walk through Dharavi is a journey through a dank maze of ever-narrowing passages until the shanties press together so tightly that daylight barely reaches the footpaths below, as if the slum were a great urban rain forest, covered by a canopy of smoke and sheet metal.
NEXT PAGE »
市場行銷觀察 Marketing